Implementing BG-NBD, a probabilistic hierarchical model, using PyMC3 to analyze customer purchase behavior Customer lifetime value (CLV) is the total worth of a customer to a company over the length of their relationship. The collective CLV of a company's customer base reflects its economic value and is often measured to evaluate its future prospects.

While many ways to estimate CLV exist, one of the most influential models to surface in the past couple of decades is the Beta-Geometric Negative Binomial Distribution (BG-NBD).¹ This framework models customers’ repeat purchasing behavior using the Gamma and Beta distributions. Part 1 of this series of articles already explored the mathematics behind this model. Meanwhile, part 2 introduced lifetimes, a library that allows us to conveniently fit a BG-NBD model and obtain its maximum likelihood estimate (MLEs) parameters. I’d suggest you read these parts if you haven’t as the upcoming content builds on top of them.

This last part of the series presents an alternative way to implement BG-NBD — one that relies on Bayesian principles. We’ll be using PyMC3 to code this implementation. While the principal aim of this article is to elucidate BG-NBD through the Bayesian lens, some general points on the Bayesian worldview and PyMC3 framework will also be presented. Here is our agenda:

You might be wondering as to why there is a need for another implementation if we already have the user-friendly lifetimes in our arsenal. The answer lies in the contrast between frequentist and Bayesian inference and the advantages offered by the latter.

To illustrate these differences, let’s imagine the frequentist and Bayesian frameworks as two programming functions that attempt to model statistical problems (such as CLV estimation). We’ll see that these functions have crucial differences in their inputs and outputs.

Both functions take as an input the dataset (the observations). However, the Bayesian function requires additional inputs in the form of prior distributions. Priors reflect our initial assumptions of the parameters of the models and will be updated after the observations have been taken into account.

The inclusion of priors is a double-edged sword. On the one hand, priors offer a way for users to use their domain knowledge to ‘guide’ the model into finding the correct parameters. In BG-NBD for example, if we’re sure that most of our customers make purchases at a rate λ of 4 transactions/week, we can supply priors that would lead to a Gamma distribution with a mean of 4. If this intuition is only slightly off-the-mark (for example, if the real λ is 3.5 transactions/week), the Bayesian framework will allow us to arrive at the correct values with only few data points.

On the other hand, since there isn’t a single ‘correct’ way to choose the priors, the Bayesian modeling process is subjective and variable. Two statisticians sharing the same data but employing different priors could end up getting completely different outcomes. This subjectivity is among the chief reasons why some practitioners eschew Bayesian. Nevertheless, as more data points are included in the modeling, the influence of priors diminishes.

The two functions also differ in their outputs. They both return the parameter estimates of the model but in different forms. The frequentist returns them as point estimates. For example, we’ve seen how the frequentist library lifetimes uses MLE to calculate the point estimates of r, α, a and b. In contrast, the Bayesian returns them as probability distributions. These distributions, called posteriors, represent our updated beliefs about the parameters after taking into account the observations. 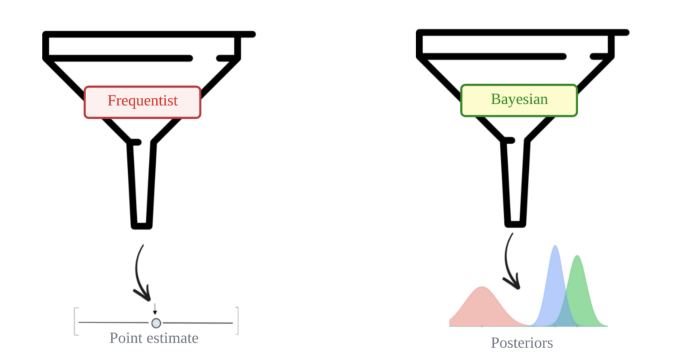 The obtainment of posteriors is another aspect where the Bayesian framework outshines the frequentist. With posteriors, it is easy to visualize the most plausible values for the parameters and quantify any uncertainty in our estimates. Additionally, the prior-to-posterior cycle provides a principled way to update the parameters if additional observations become available.

We’ve seen in Part 1 that the BG-NBD model is a hierarchical probabilistic model. Hierarchical here refers to the fact that the parameters of some distributions are modeled by other distributions (‘parent’ distributions). We’ll soon see that PyMC3 allows us to express these parent-child relationships in code.

A blueprint is provided below to guide the coding steps. This blueprint walks through the model’s logical flow, starting from its inputs (the data and the prior distributions) and ending with its outputs (the posteriors). 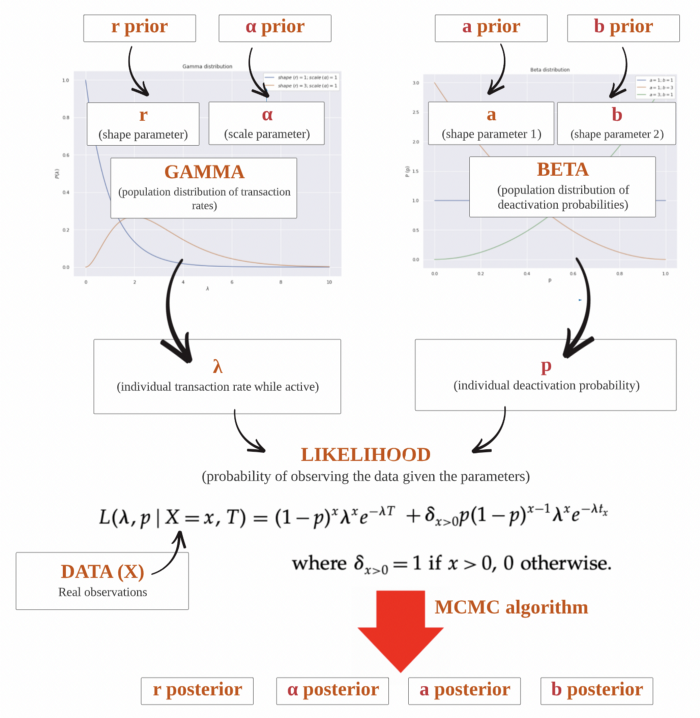 Some remarks on the above blueprint:

Details about the above distributions were provided in part 1; take a look at it if you’re unfamiliar with them!

As discussed previously, we’ll need to supply a prior each for r, α, a and b. We can think about these priors and their respective parameters as the ‘hyperparameters’ of our model. There are various considerations to keep in mind when choosing a prior:

In our case, the following are our considerations and assumptions:

Truncated Normal is frequently used as prior as its four parameters provide an intuitive way to ‘guess’ a value. μ represents our most probable guess, σ reflects our uncertainty level and A and B designate the lower and the upper constraint, respectively.

Here are some examples of the Truncated Normal: 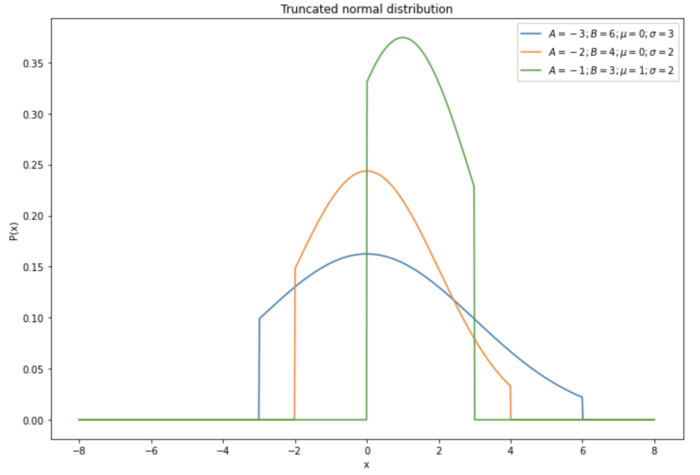 With these considerations, let's now construct our Gamma priors. Here are the steps: 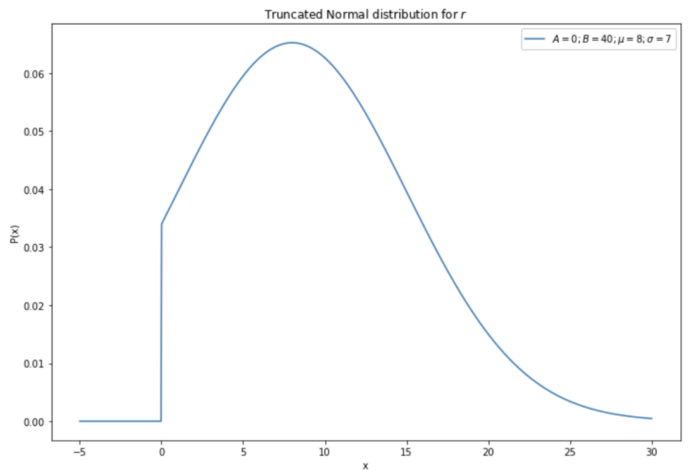 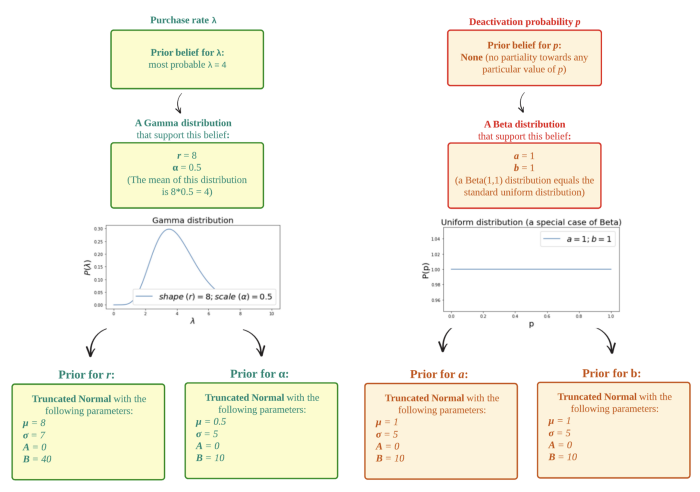 Note that for the Beta parameters a and b, we have chosen the uninformative uniform distribution as priors to reflect that we have no prior knowledge on the deactivation probability (p) of our customers.

Coding everything in PyMC3

Throughout this article, we will be using the sample table provided by lifetimes. This table records the transactions of CDNow, a dot-com era company that sold CDs. Here is how we load it:

As discussed in part 2, prior to modeling, this transactions table should be subjected to two prerequisite steps:

We’ll employ the same splitting regime we used in part 2 to facilitate the comparison between the lifetimes and the PyMC3 estimates.

With this theoretical framework set up, we’re now ready to start coding. We’ll use PyMC3, a powerful Bayesian modeling library. While we’ll provide a few pointers on PyMC3 itself, our focus will be on the BG-NBD implementation².

The following is the BG-NBD implementation in PyMC3. As you can see, the code closely mirrors the theory presented earlier.

Having said that, two parts of the code might not be as straightforward and warrant further discussion. These parts, the custom likelihood function (line 30–41) and the MCMC sampling (line 43–62), are elaborated below.

After describing the model, we can execute an MCMC algorithm to sample the posterior distributions. MCMC is a family of simulation algorithms that allows the sampling from a distribution whose closed-form PDF or PMF is unknown. It works by constructing a Markov chain — a multi-state system that allows transitions from one state to another according to specific probabilistic rules. The chain is designed so that its steady state matches the distribution to be sampled.

We start the chain construction and sampling using pm.sample(). Upon completion, the function returns a trace object that contains the drawn samples. If the sampling process went well (i.e. a steady state was reached), these samples would represent our desired posteriors. Before further analysis, we should confirm the convergence (the steady-state attainment) of the algorithm, as using samples obtained before convergence could lead to erroneous downstream analyses. To ascertain convergence, we can plot trace using pm.trace_plot()⁴; a ‘meandering’ pattern indicates non-convergence and is no bueno. Here is the trace plot for our experiment: 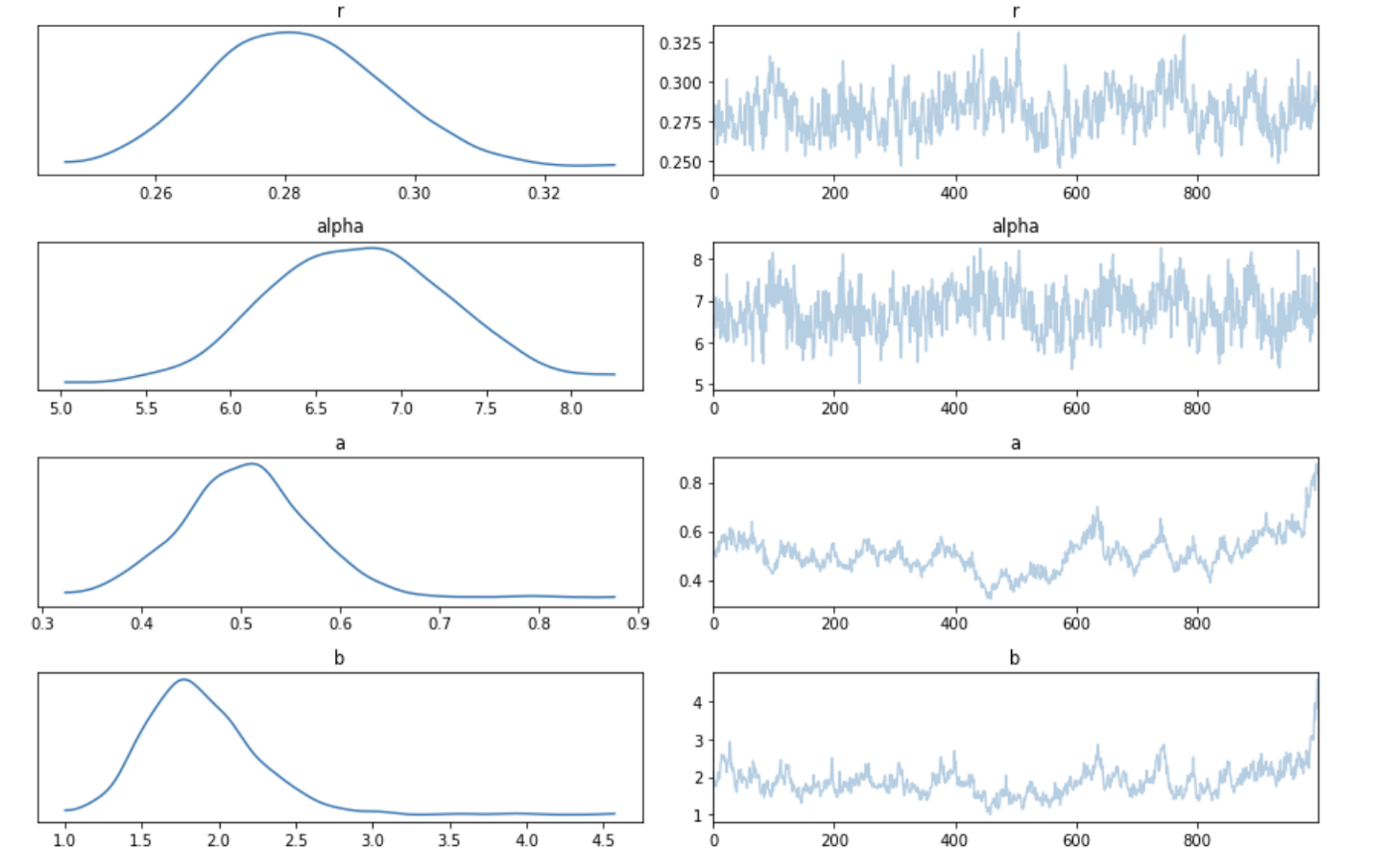 We see that no obvious sign of non-convergence was detected.

Since we’re confident that the sampling process ran properly, we can proceed to analyze the posteriors. A common starting point is pm.summary(), which returns summary statistics of our posteriors. Let’s print their means. 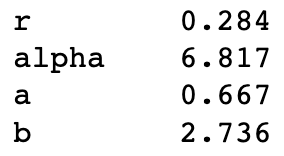 We note that these posterior means are quite different from the prior means. For instance, b goes from 1 (prior mean) to 2.736 (posterior mean). This indicates that our prior beliefs were not fully supported by the data and thus were ‘updated’.

In the previous article of the series, we’ve seen the use of lifetimes library can also be used to estimate the parameters r, α, a and b. Let’s now compare the result from the two implementations: 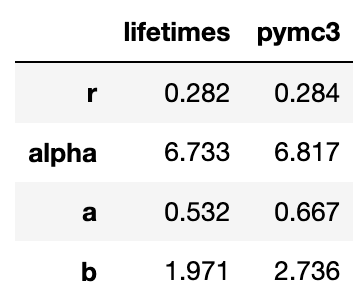 We see that despite coming from different frameworks (frequentist vs Bayesian), the estimated parameters are not that different.

Analysis of estimated Beta and Gamma distributions We can then use the mean (i.e. the most probable) parameter values of the Bayesian posteriors to construct and visualize the Gamma and Beta distributions. Let’s start from Gamma — here is the graph: 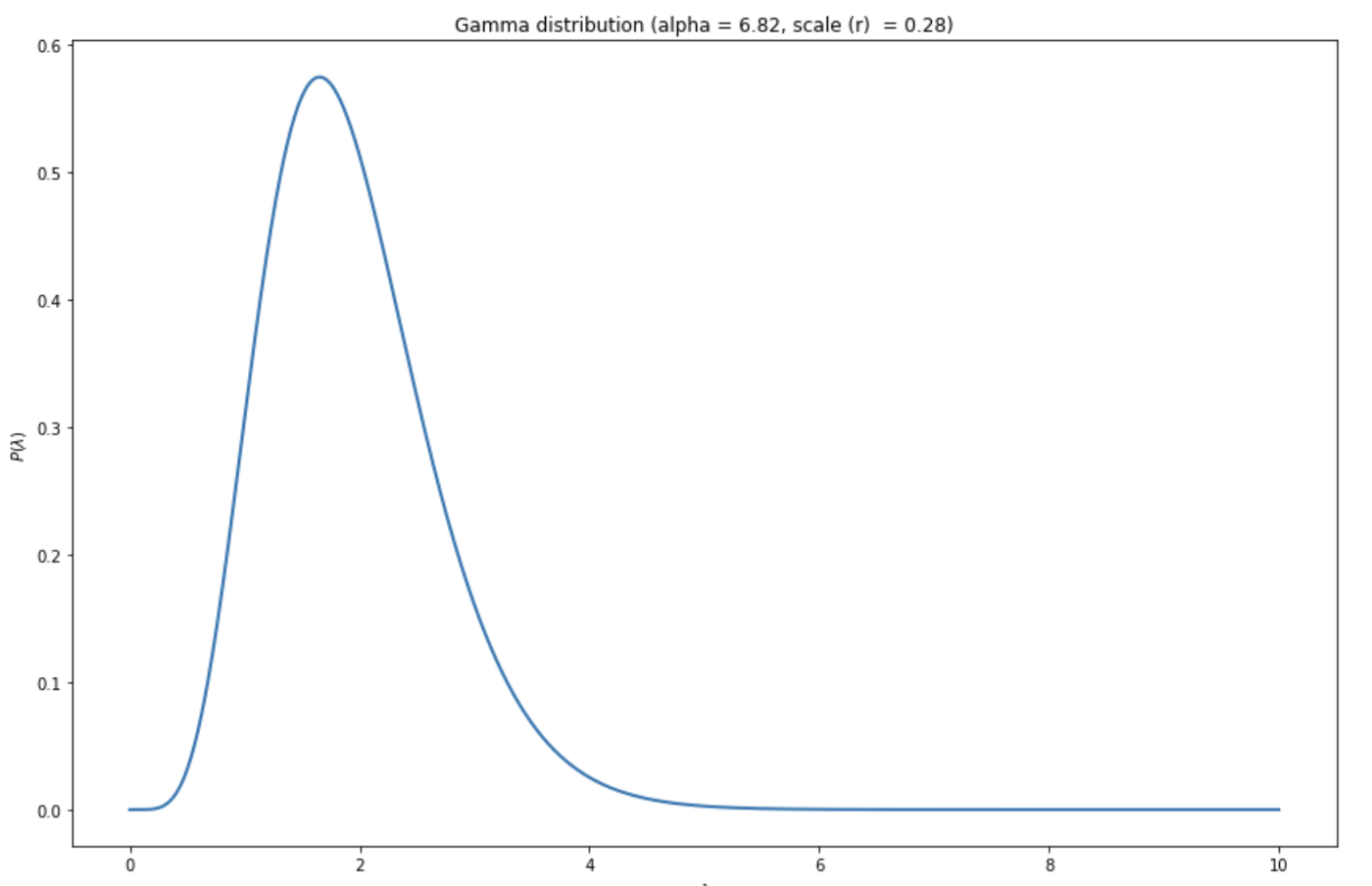 As we discussed in part 1, the Gamma distribution has a practical significance — it quantitatively describes the collective purchasing behavior of our customer base. Specifically, it indicates the distribution of purchasing rates within the population. The plot above displays a relatively desirable Gamma distribution with most of the 𝜆 found near 2. This means our customers are expected to shop at a rate of 2 transactions per week — not a bad rate for a CD company!

Now let’s look at the Beta distribution, which describes the distribution of the deactivation probabilities p within our customer base: 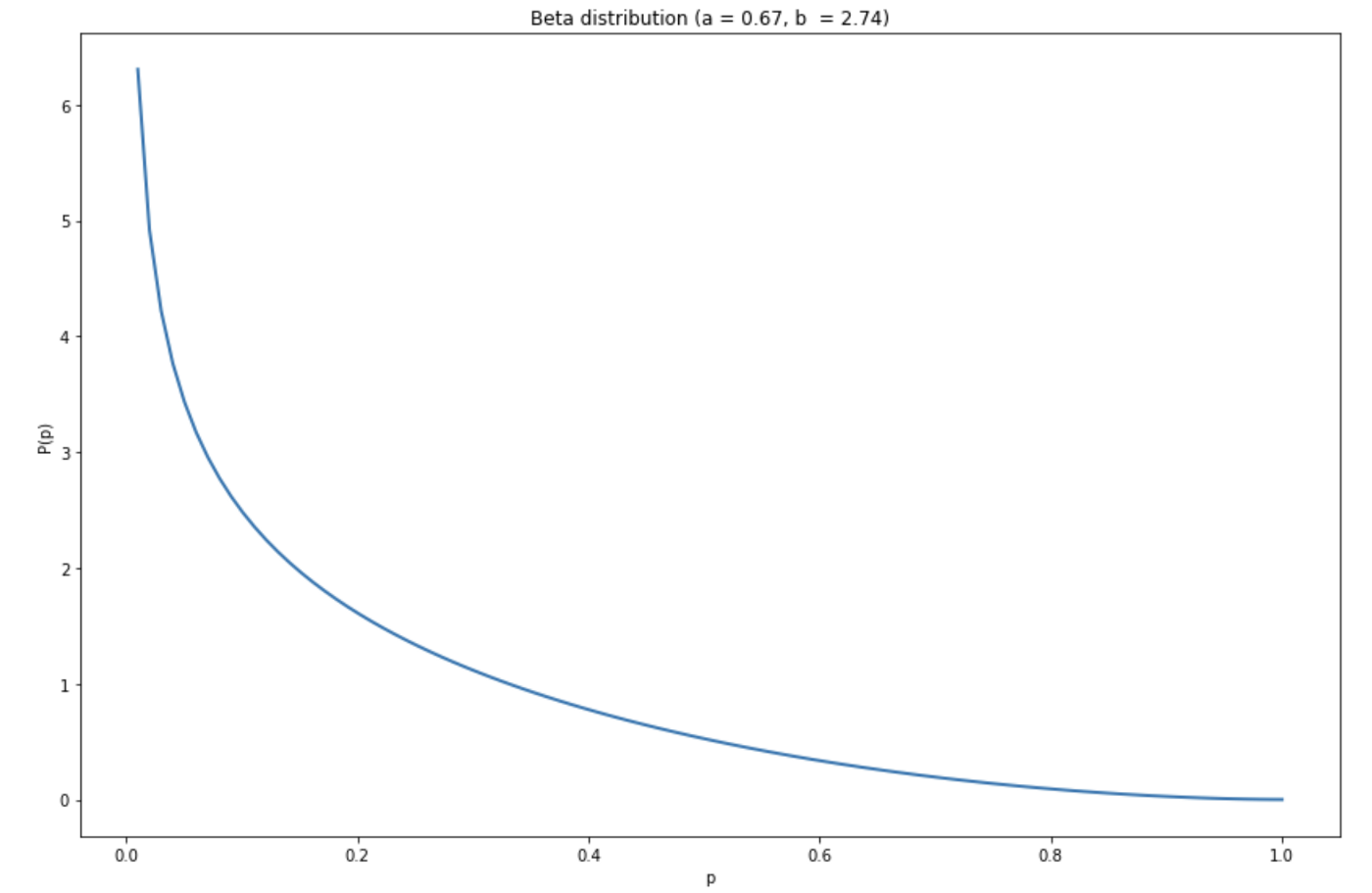 The plot displays a relatively healthy Beta distribution that concentrates most of its p near 0. This implies that as a whole, our customers are unlikely to deactivate.

In this series of articles, we’ve discussed the fundamentals BG-NBD model and showcased its value in tackling real-world business problems.

Specifically, in article 1, we learned that BG-NBD models the repeat purchase behavior and the deactivation probability of the customer population. The resulting probability distributions are not only theoretically sound; they also present insightful quantitative representations of our individual customers and customer base.

In article 2, we explored lifetimes, the frequentist implementation of BG-NBD. lifetimes allows us to fit a BG-NBD model with several lines of code. We’ve also seen a couple of practical ways to use the outputs from lifetimes. I’d recommend lifetimes for analysts who don’t wish to manually code the BG-NBD equations and want to start deriving business values immediately.

This third and last article implemented BG-NBD using the Bayesian PyMC3 library. This implementation involves coding BG-NBD from scratch and as such requires a more in-depth understanding of the model. The advantage is that it allows us to specify the priors, and this allows us to incorporate our expert knowledge into the modeling process. I’d recommend this approach for practitioners having both deep familiarity with BG-NBD and domain knowledge of the customer base they are trying to model.

[2] If a deep dive of PyMC3 interests you, do check out the awesome book Probabilistic Programming & Bayesian Methods for Hackers.

[4] Trace plotting is just one of the many ways to confirm convergence. The PyMC3 documentation provides an extensive treatment of the topic.

Note: All images, diagrams, tables and equations were created by me unless indicated otherwise.